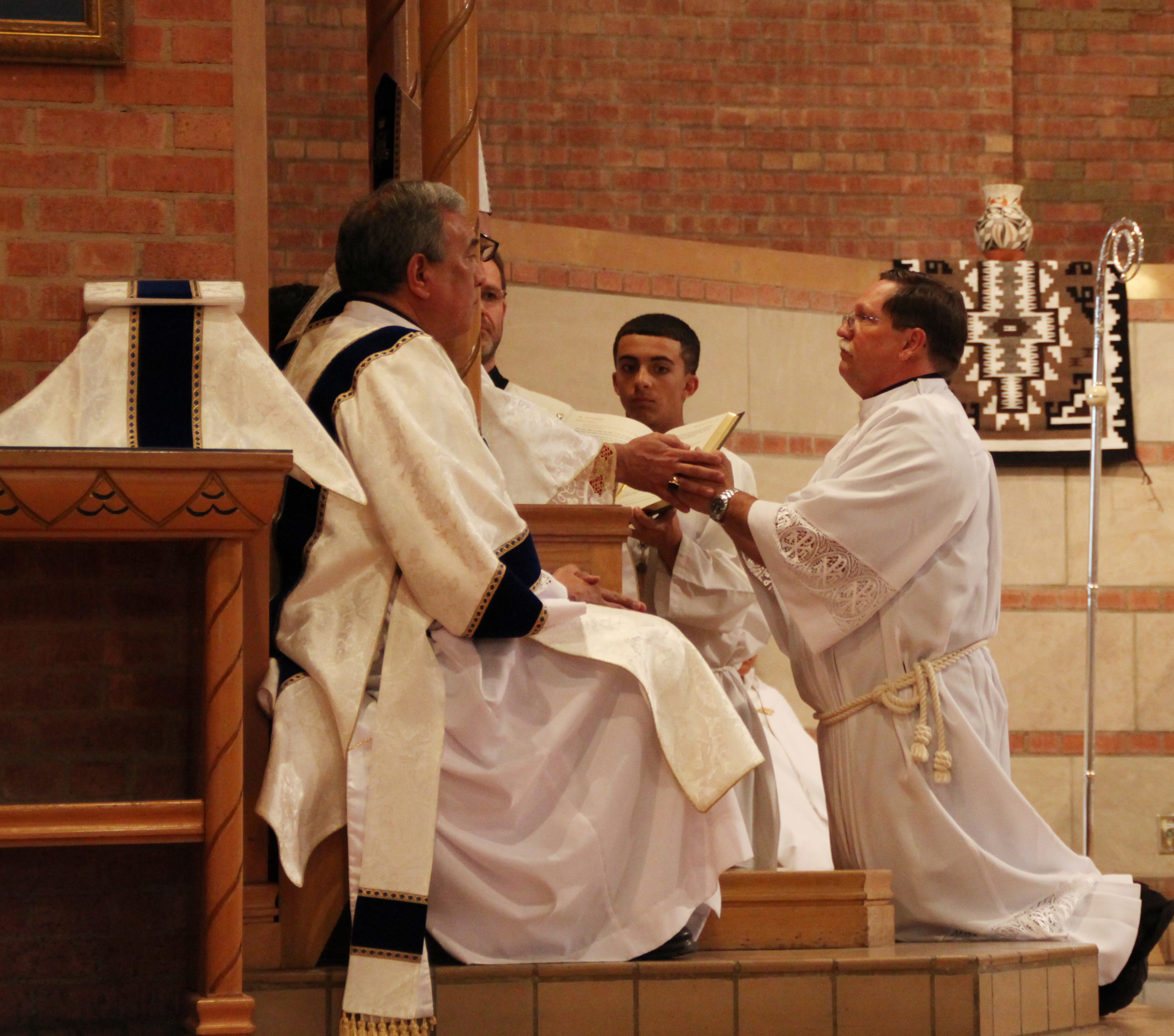 This latter option was the one chosen by Deacon Todd Church for some time. Deacon Church, the new director of religious education and youth ministry for the Diocese of Gallup, recalls that his path to conversion, taken with his wife, was often difficult.

“I grew up in the First Congregational Church of Sioux Falls, South Dakota, but it didn’t really mean anything to me,” he recalls. “When I met my wife, Ann, she was a Catholic, but a non-practicing Catholic.”

The couple had two children, and eventually agreed that it would be a good idea to attend Church every Sunday. But which congregation? Eventually they settled on the Catholic church – Ann’s church – and Deacon Todd remembers he had no intention of converting.

“I did sign up for RCIA, thinking it was just a way to register for the parish. I didn’t think it was a program for becoming Catholic! I had a lot of misconceptions about the Catholic faith, and struggled through a number of things with Church doctrine.”

Eventually, Deacon Todd did come to accept Church teaching, and became Catholic in 2001. His wife, a medical doctor, had been attending classes alongside him. Much of what she had learned in medical school conflicted with Church teachings about contraception and human sexuality.

“Finally, one day, she told me she couldn’t do it anymore,” Deacon Todd says. “She couldn’t be involved with tying tubes or contraception.”

Then came the true test of faith, as following their newfound faith began to conflict with their previous lifestyle.

“I was managing three Quiznos at the time, and we had a bunch of land, two houses, and lots of toys. My wife ended up having to leave her job, because the other doctors didn’t like what she was doing. Suddenly everything was a struggle. We ended up losing pretty much everything we had.”

The family ended up moving to New Zealand, where Ann could find a job. Deacon Todd volunteered with the local St. Vincent dePaul Society, helping to deliver meals. It was here that he first felt the call to become a deacon. One day, while delivering meals, he knocked on the door of a man who wasn’t home. A woman came out of the next apartment to offer help, and agreed to give the package to the man when he returned.

“I said, ‘Oh, God bless you!’”, Deacon Todd recalls. “This woman started crying. She said ‘I’m 63 years old and no one has ever said that to me before.’ When that happened, I realized people aren’t just hungry for food – they’re spiritually hungry as well.”

The family eventually moved back to the United States, and needed a town with two requirements: a place where Ann could practice medicine without violating her faith, and a diaconate program for Todd. They ended up in Grants, New Mexico, where Ann now works as an OB/GYN, and Deacon Todd was ordained to the Diaconate in 2014.

It’s clear that his conversion, and continued zeal for the faith, give Deacon Todd a unique outlook on running the Religious Education and Youth Ministry offices.

“When you become a Catholic as an adult, it’s because you want to, not because you have to. So many Catholics have no idea of the gift they have here. When you’ve never gone without it, sometimes you don’t realize the beauty of what you have – and of course what I’m talking about is the Eucharist.”

He has only been working at the Diocese for a month, but already he knows exactly what his ministry should accomplish.

“If we can build a foundation for young people, to grow into their faith as adults, that’s one goal,” he says. “And for all the people of the Diocese of Gallup, the ultimate aim is to help them build a relationship with Christ.”

Having built his own relationship with Christ from nearly nothing, and enduring hardship because of it, Deacon Church knows firsthand what it is to experience both suffering and joy in the Catholic Faith. The next chapter in his life will be to help others to live out their faith fearlessly as well.