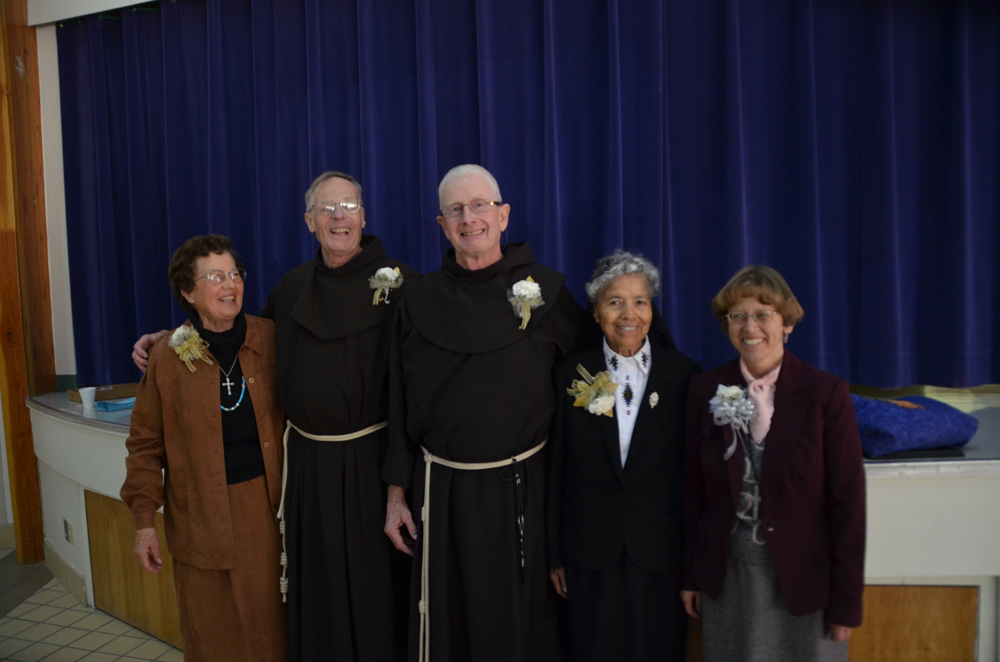 Ask Sr. Rose Marie Cecchini about why she felt called to consecrated life, and she doesn’t hesitate.

“My response to this vocation is an expression of love – not just for God, but for all God’s people.”

The soft-spoken Sister, a member of the Maryknoll Society, is celebrating 60 years as a professed religious, and is one of six other religious in the Diocese of Gallup who is celebrating an anniversary in 2014.

Each year, the Diocese holds a special Jubilee Mass to honor men and women of different religious orders who reach milestones in their years of service. Br. Paul O’Brien, parish administrator at All Saints in Ganado, AZ, is now in his 50th year as a member of the Franciscans. He reflected that as he grew more experienced in his vocation, he noticed a growing sense of peace, and an appreciation for the many people he’s encountered.

“We’re willing to think in terms of another world – another side of spirituality, you know, the Kingdom [of God]. And we provide a sense of community, especially in this Diocese, where it doesn’t take long to get to know everyone.”

Only a day before the Jubilee Mass, the Vatican officially announced that 2015 will be a special Year of Consecrated Life. Starting his homily with a nod to this announcement, celebrant Bishop James Wall noted that it was a confirmation of the importance of religious life to the work of the Church.

“We’re able to see [God’s] goodness reflected in the lives of our Jubilarians,” he said, adding that all who answer a call to a religious vocation are following in the footsteps of the first Apostles called by Jesus to leave their old lives behind them.

“It requires self-sacrifice, to leave a life that we have once known, in order to follow Jesus,” the Bishop said. “At the heart of the life of the one who says ‘yes’ to the Lord…is that they are called to be an expression of the love of Christ.”

Sr. Cecchini, who spent 25 years in ministry in Japan and other Asian countries including Nepal, currently runs the office of Peace, Justice and Creation for the Diocese. After her many years abroad, she says she was drawn to the Gallup Diocese in large part because of the unique and vibrant local cultures, especially those of the Native Americans. Br. Paul also mentioned the vibrant spirituality of the Native Peoples as one of the biggest influences on his own Faith, and the common ground that Catholicism and Native cultures share.