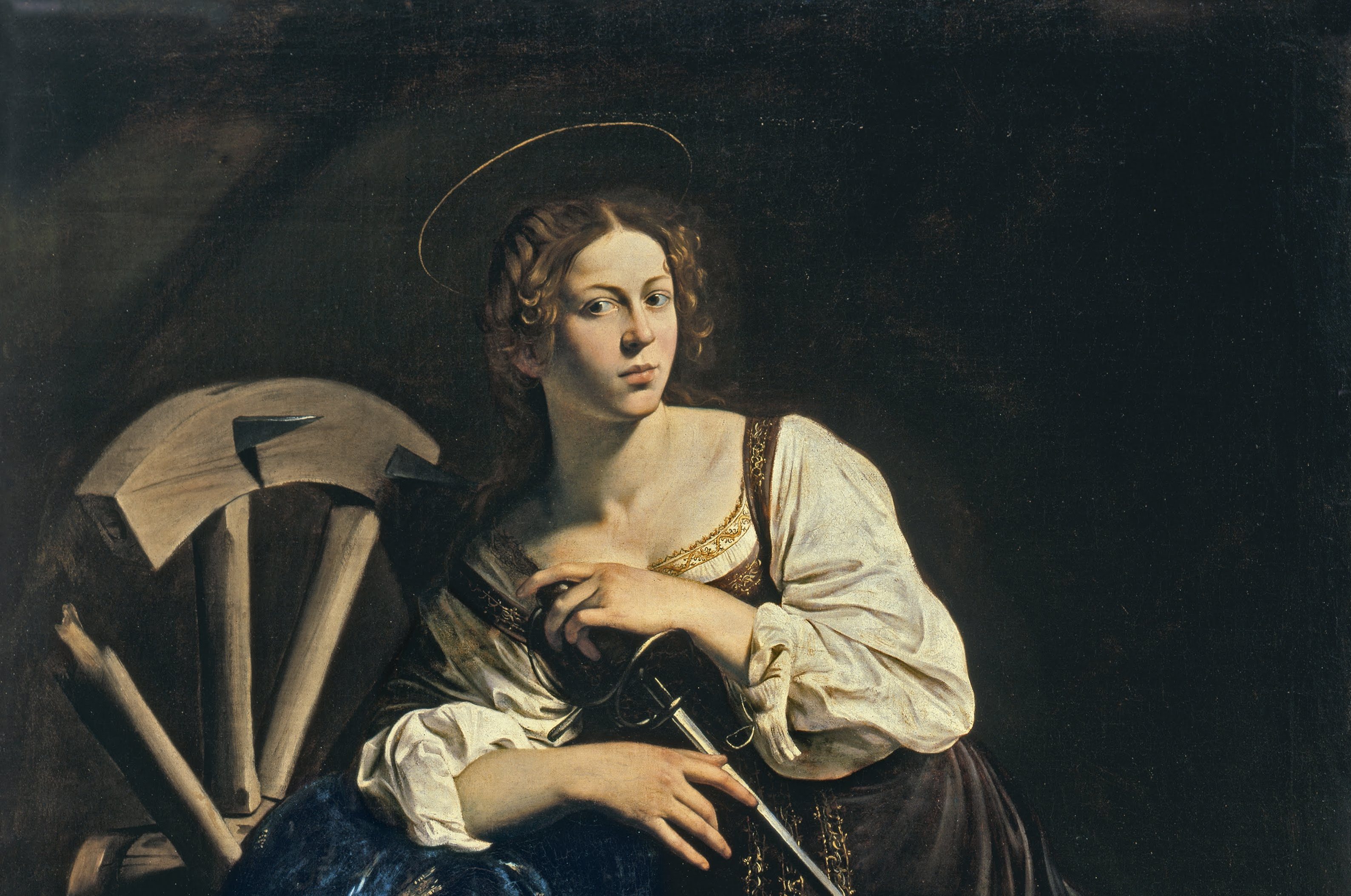 The legend of Saint Catherine tells us that she was the daughter of a king and that she was blessed with brilliant intellect and great beauty. Once while studying in the great Library of Alexandria, she nodded off. In a dream she saw a beautiful woman holding a handsome little boy on her lap. Pointing to Catherine the lady asked her son, “Would you like to marry her?” “No,” the boy replied. “She is too ugly.” Catherine awoke from the dream weeping.

An elderly man walked over to ask what was wrong, and she told him about her dream. He interpreted for her the dream. “The lady you saw in your dream was the Blessed Virgin Mary, and the little boy was her Son, Jesus Christ. He found you ugly because you are unbaptized and your soul is stained with sin. If you became a Christian, He would find you beautiful. I am a priest. I can teach you the Christian faith.” Eager to see the Lady and her Son again, Catherine begged the priest to instruct her.

After her baptism Catherine dreamed again. Once again Mary and Jesus appeared to her, and once again Mary asked the Child if He wanted to marry Catherine. “Oh, yes!” He said. “For now she is lovely!” Then the Christ Child placed a ring on Catherine’s finger as a token that she belonged to Him. Many artists have depicted this mystical marriage of Saint Catherine, including Memling, Veronese, Poussin, and Van Dyck.

Catherine was eighteen years old when she fell victim to the Roman emperor Diocletian’s empire-wide persecution of Christians. In Egypt the emperor’s delegate Maximinus urged Catherine to renounce her faith and demanded sacrifices to his pagan gods to save her life. She protested, and countered by offering to defend Christianity in a public disputation. Maximinus recognized that he was not equipped to argue with her. He ordered fifty of his most learned philosophers to debate Catherine, promising them great rewards if they could get her to abandon her Christian faith. At first the scholars were indignant at being asked to debate a young woman, but Catherine’s arguments won them over. When all fifty embraced Christianity, the emperor ordered them burned alive.

Maximinus had Catherine thrown into a dungeon without food or water, and then went off on a trip. During his absence his wife Faustina and her attendant Porphyrius visited Catherine in prison. Catherine converted them both, and Porphyrius then converted two hundred soldiers. When the emperor returned and Faustina tried to defend Catherine, he ordered them all executed.

The emperor was so impressed by Catherine’s beauty, if not her brilliance, that he tried to make her his new empress. When she refused, he became enraged and condemned her to be tortured. He designed a spiked wheel that was supposed to tear her to pieces. But the machine miraculously broke apart and killed many onlookers. At this point, and before she could do anything more, Maximinus then ordered Catherine beheaded. It is said that when the ax fell, milk poured from her body instead of blood. Angels carried her body to Mount Sinai, where the emperor Justinian later built a monastery to contain her relics. It still stands as the oldest continuously occupied monastery in the world.

Saint Catherine has served for centuries as the patron of scholars, students, philosophers, preachers, and apologists. She may continue to represent the subversive power of women’s wisdom, a voice which many would like to silence lest it subvert the whole world with its irrefutable logic.

Saint Joan of Arc testified that Saint Catherine was one of the three saints who spoke frequently to her. In pictures, Catherine is usually represented with a wheel. She is also one of the Fourteen Holy Helpers (a once-popular devotion that included men and women saints).