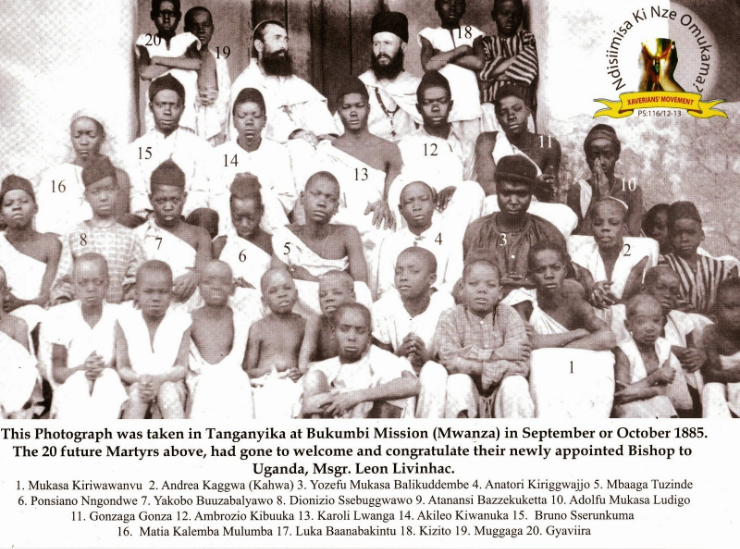 Charles was from Uganda and was abused as a page as a young man under the rule of King Mwanga of Baganda in Uganda. Charles became head of pages and wanted to protect other young pages, converting them to Catholicism.

King Mwanga was a cruel and capricious ruler. One of his first acts, after becoming king at the age of eighteen, was to order the beheading of James Hannington, the missionary and newly appointed Anglican bishop. The Christian missionaries, the king believed, were the advance guard of encroaching European powers, they were tempting his people to abandon their traditional way sand thus posed a threat to his own rule. What is more, they also reproached his habit of demanding sexual favors from the young men who served as his pages.

In May 1886 Mwanga summoned all his pages captured by his warriors and ordered the Christians among them to step forward. Fifteen of them approached, including the eldest, twenty-four-year old catechist Charles Lwanga, as well as the youngest, a boy of thirteen whom Charles had baptized the night before. The king told them to deny their faith but they said they would remain Christians “until death.” The king then ordered all of them put to death.

The group was marched to an execution spot on Lake Victoria, more than sixteen miles away. There they were wrapped in reeds, stacked on a pyre, and set aflame. As they faced their horrific deaths, their exemplary courage and cheerfulness were comparable with those of the early Christians. The martyrs offered no protest, but simply murmured their prayers. Lwanga’s very last words were “My God.”

Reports of these deaths, and many more in succeeding weeks, spread quickly, resulting in many conversions to Christianity. The martyrs were canonized in 1964 by Pope Paul VI, who made a pilgrimage to their shrine.

“Poor, foolish man…you are burning me, but it is as if you were pouring water on my body.” – St. Charles Lwanga