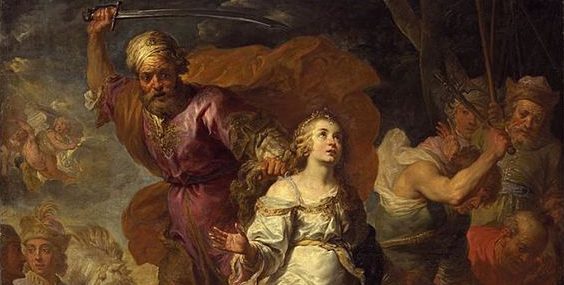 Dymphna, the patron saint of those afflicted with nervous and mental disorders, was the daughter of Damon, a pagan Irish king. Her short life, exotic in its setting, is terrifyingly modern in its implications.

Dymphna, like her mother, was both beautiful and devout. She was tutored by a pious Christian laywoman and a priest, Gerebernus, who baptized her and her mother in secret. Dymphna grew in grace and wisdom and early on decided to consecrate herself to Jesus with a vow of chastity.

When her mother died, Damon went mad with grief, and was counseled to find a second wife. As in a fairy tale, he sent messengers to many countries to seek out a woman as lovely as his first wife. When these returned saying that no one could be found as charming as his own daughter, the king decided to cease his search and incestuously marry Dymphna. He then became obsessed with her, who was the image of her mother, and tried to make her his bride.

With the priest Gerebernus, she escaped to Gheel (in what is now Belgium) finding sanctuary among a small community of hermits. The king tracked them down and ordered his vassals to kill them. They beheaded Gerebernus but balked at hurting Dymphna, so the king unleashed his own sword and cut off the head of his own  beautiful fifteen-year-old daughter.

According to legend, certain mentally ill persons who witnessed Dymphna’s martyrdom were immediately cured. Others who prayed at her grave also found relief. As the stories spread, more families brought their mentally ill relatives to Gheel and prayed for a miracle. On leaving, they sometimes boarded their relatives in the homes of local families in Gheel.

A unique community gradually grew up around Dymphna’s shrine, where the mentally ill found a supportive environment in private homes. Gradually more and more cures of mental illness were attributed to St. Dymphna. Her relics were applied to persons coming on pilgrimage from great distances. A large and beautiful church was dedicated to Dymphna in 1340, and her relics are still venerated there. Many miraculous healings are attributed to them.

There is an infirmary in the town of Gheel for the mentally challenged. After some time with the religious Sisters at the institution, the patients are placed with families in the area who accept them into their homes with great tenderness. In the United States, a League of St. Dymphna founded in Ohio offers many spiritual benefits for persons afflicted with mental illness.

Heavenly Father, you have willed that Saint Dymphna should be invoked as the patroness of nervous and mental disorders. We beg you through the intercession of your Saint Dymphna, who sealed with her blood the love she had for you, to grant relief to those in our midst who suffer from mental afflictions and nervous disorders. Through Christ our Lord. Amen.