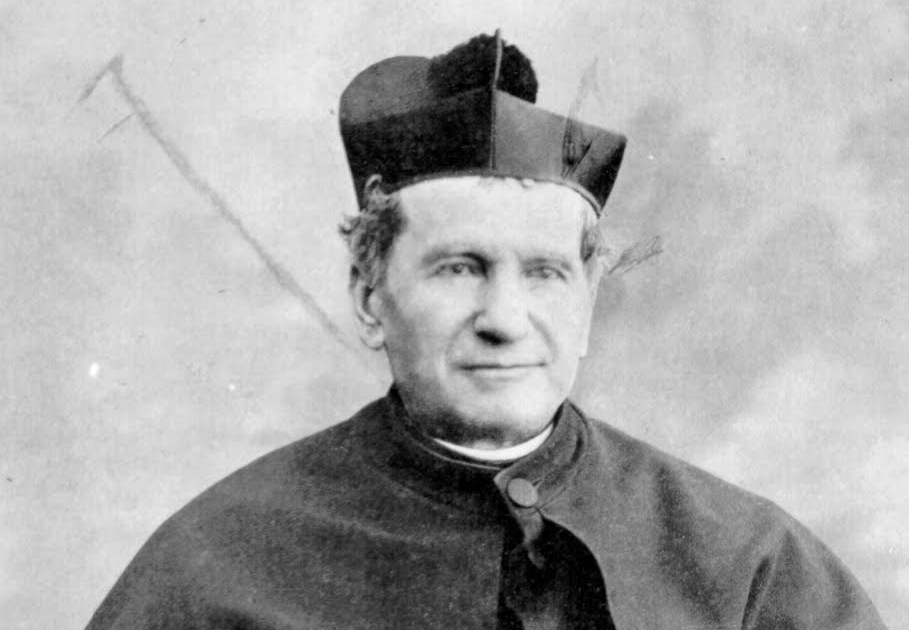 Giovanni Melchior Bosco was born in Piedmont (now in north-western Italy) and raised by his mother after his father, a peasant farmer, died when John was only two years old. As soon as he was old enough, John went to work supporting his family with odd jobs and as a shepherd. He was brought up in extreme poverty; when he entered the seminary in 1831 his clothes and shoes were provided by charity. He was ordained a priest in 1841 and soon settled into his life work, the education and apostolate of boys and young men, especially of the working class.

He received an excellent formation as a priest in Turin, Italy and after his ordination he began, influenced by St. Joseph Cafasso, to devote himself to looking after the needs of those who were flocking into the rapidly industrializing city looking for work. Thousands of young people were roaming the streets with no pastoral care, on a course that would land them in prison. John Bosco made them his special concern. The virulently anticlerical government of Turin closed all religious houses in 1855, but John Bosco gathered his abandoned boys into what he called an “Oratory,” thereby evading these laws. He developed a “total dedication” approach to his students, began all-day Sunday outings with a full agenda of Mass, work, and games. The Oratory acquired a house, his mother came to help, and it was soon housing six boys—a number that was eventually to grow to over eight hundred.

An eloquent preacher and a popular writer of great skill and diligence, John Bosco also had a reputation as a visionary, a wonder worker, and one with an extraordinary gift for handling difficult youths without punishment but with a gentle and effective firmness. He somehow found time to write; he produced histories of the Church and of Italy, several biographies and a series of educational textbooks, including a simple explanation of the metric system. One of these was in its 118th edition by the time of his death. His educational methods are now generally regarded as old-fashioned, but there is no questioning the basic impulse that lay behind them: total love and dedication. He divided human needs into four foundational spheres: home, school, Church, and society; in these, everyone experiences belonging, learning, meaning, and social interaction. All these needs must be met if people are to be happy and fulfilled.

In 1859 he began to organize a Congregation, the Society of Saint Francis de Sales (the Salesians) which was formally approved in 1874. At the founder’s death fourteen years later it numbered 768 members in sixty-four houses in Europe and America. Now it numbers many thousands and specializes in pastoral work and schools of all kinds, including technical, agricultural, and ecclesiastical seminaries. As a church-builder, John Bosco achieved the apparently impossible by heroic trust in Providence to provide necessary finances. One of his triumphs in this regard is the church of Sacro Cuore, Rome, completed shortly before his death. Another achievement was the foundation of an Order for nuns to do work for girls similar to that achieved for boys by his own Institute. It was called the Daughters of Mary, Help of Christians, and spread to most of the countries where the Salesian priests were at work.

Shortly before his death, Don Bosco advised his followers: “Do not ever forget these three things: devotion to the Blessed Sacrament, devotion to Mary, Help of Christians, and devotion to the Holy Father!” The funeral of John Bosco in 1888 seems to have been followed by a large proportion of the city of Turin: 40,000 people visited his body as it lay in state. He was canonized in 1934.

“I have promised God that until my last breath I shall have lived for my poor young people. I study for you, I work for you, I am also ready to give my life for you. Take note that whatever I am, I have been so entirely for you, day and night, morning and evening, at every moment.”