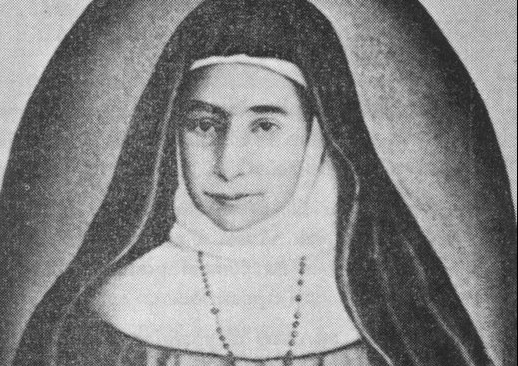 Born Soultaneh Maria Ghattas to a pious and hard-working Palestinian family in Jerusalem, Maria spent her whole life working among the poor of Palestine. At fourteen years of age, she entered the congregation of the Sisters of Saint Joseph of the Apparition and after professing vows, received the religious habit, along with her new name, Marie Alphonsine. She was assigned to the sisters’ school in Bethlehem.

Sister Marie was an outstanding catechist and educator and a tireless apostle, founding confraternities and associations that promoted the devotion to Our Lady through the prayer of the Rosary. During this period, she experienced repeated visions of Our Lady who asked her to found a congregation for the daughters of her land which would have the name of “Rosary Sisters.” Her spiritual director, Father Joseph Tannous, Chancellor of the Latin Patriarchate, prepared the groundwork for the new order. Three years after its foundation Sister Marie Alphonsine obtained permission from Rome to join the new congregation.

Mother Marie Alphonsine dedicated the rest of her life to the care and education of young women. She served as a teacher and catechist in Jaffa, Beit-Sahour, and Salt. She also established an orphanage in Ain Karem. She promoted the Confraternity of the Immaculate Conception, and the Confraternity of Christian Mothers.

She had a great faith in the Providence of God and a complete and filial confidence in Mary, the Mother of Jesus. Marie is distinguished by two particular virtues: a love for silence and the hidden life; and a love for the cross and for sacrifice. Upon direction from the Blessed Mother, she told no one other than her spiritual director and the Patriarch about her conversations with Mary. She suffered trials and lack of support with the silence, patience and dignity of Mary at the foot of the cross.

Towards the end of her life, Mother Marie Alphonsine’s health began to fail. She died while praying the rosary on March 25, 1927, the Feast of the Annunciation. She will be remembered for her virtuous life, dedication and zeal. Her devotion to the Lord, her students, and her sisters, serves as a reminder of the holiness all Christians are called to in their day-to-day lives. She was beatified in 2009, and canonized by Pope Francis on May 17, 2015.