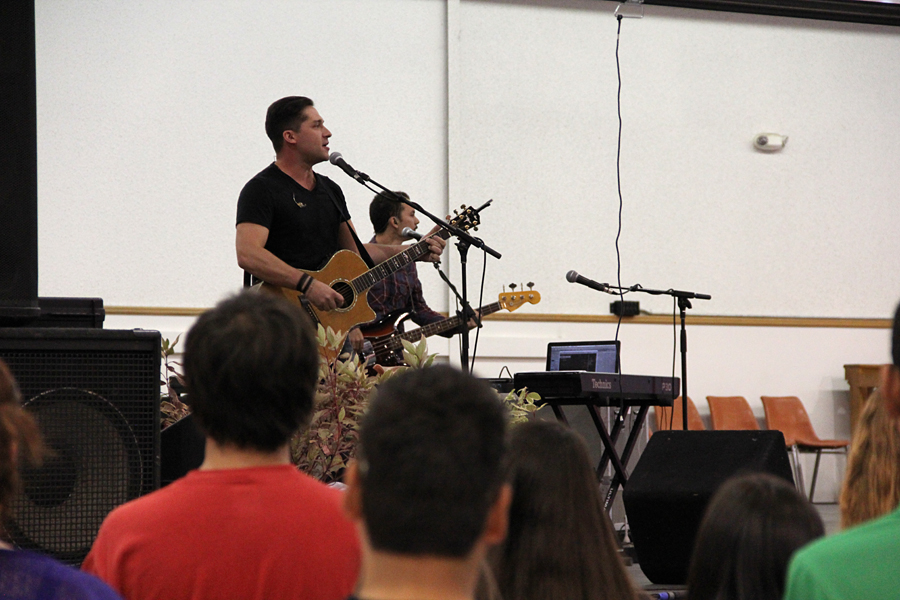 From the vast regions of the Four Corners they gathered – hundreds of middle and high-schoolers, accompanied by their parents and youth group leaders – to attend the third annual Southwest Catholic Youth Conference.

So many attended this year, in fact, that the Conference had to change venues, moving to the larger McGee Park in Farmington, NM instead of the local Civic Center. Among the day’s speakers were some familiar faces: Bishop Wall of Gallup and actor David Henrie, along with new presenters: Bishop Stephen Berg of the Diocese of Pueblo, CO and chastity speaker Sarah Swafford, with noted pro-life advocate Lila Rose acted as the Mistress of Ceremonies.

“In 2011, one of our sponsors – and current medical director – asked if we would bring in a specific chastity speaker to address kids in the area on that topic,” he said. “Our thought was that, if we can get these kids to see what the virtue of chastity is really about and spread that message to their peers, eventually the perceived ‘need’ for abortion would disappear. So, we decided to make it an all-day event for Catholic youth in the Four Corners region.”

The conference, which took place on Saturday, September 27, didn’t quite go off without a few minor hitches. At the last minute, the main speaker, Matt Fradd, had to cancel when his wife went into early delivery of their baby.

“We had to find a speaker in one day!” said Shelley Gundry, a member of LifeGuard’s board of directors. “I said to God, ‘this is your gig, you find a speaker’”.

Then, a fateful opportunity came: Paul Kim, a singer with years of experience giving talks to young people. In a short time, the LifeGuard directors learned he was available to fly out to speak at the conference.

“I suppose I learned a lot about trust that day!” Gundry adds.

While their biggest challenge had been overcome, there were still a few more to address, including the catered meals. The providers of both the lunch and dinner for the conference ended up respectively canceling because of scheduling conflicts. O’Hare noted how they were aided once again at the last minute by a local Subway restaurant, and the Knight of Columbus in Bloomfield who provided homemade spaghetti.

Despite these near-setbacks, the Conference came through with a day of talks for the young people, along with live music, Confession with many local priests who traveled to the event, and a Mass with both Bishop Wall and Bishop Berg.

“I’ve heard nothing but positive responses from the parents, youth leaders, as well as the kids themselves,” said O’Hare. “Most of them want more, whether that be additional conferences throughout the year or a multi-day event.”

He notes that such an expansion may not be possible just yet, but adds “we will see where the Good Lord leads us.”

Many of the volunteers, in recalling the event, mentioned one in particular as being especially memorable.

“At the end when [Bishop Wall] asked the kids – many had already left, as it was late – how many felt as though they might have a calling to the priesthood or consecrated life,” said Linda Stevens, another board member and volunteer. “Over 20 stood up! It was fantastic! I think vocations are very important because families are not doing a great job at recognizing a vocation in kids and the world tugs them away, so this event can help!”

It is fitting that many kids were encouraged to consider their vocation, as the theme of this year’s conference was “Answer”, a reference to 1 Peter 3:15.

“Simply proclaim the Lord Christ holy in your hearts, and always have your answer ready for people who ask you the reason for the hope that you have.”