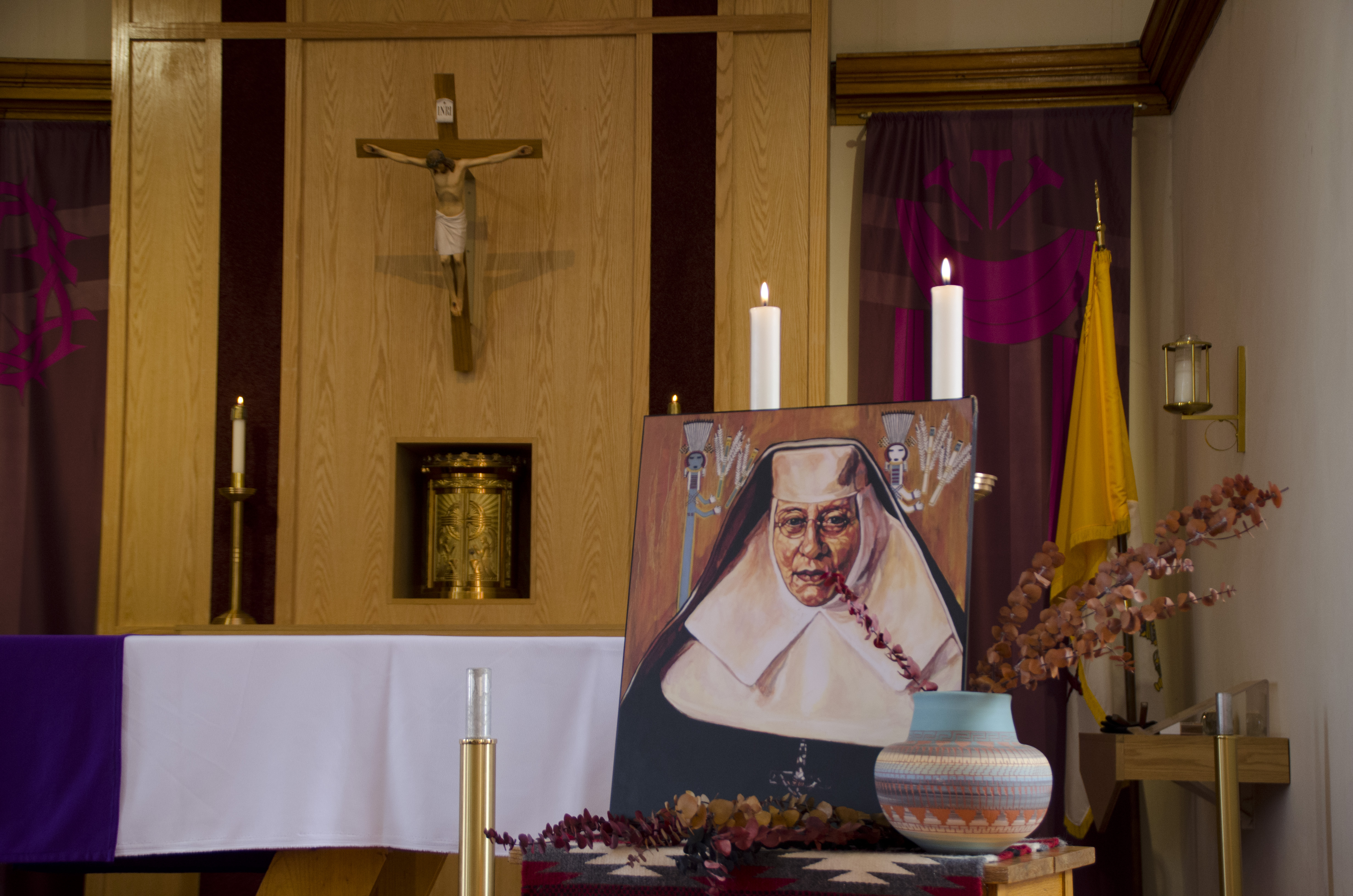 Vocations and funding. Two words that arise again and again in discussions about challenges facing the American church also came up during two listening and meeting sessions in St. Michaels, AZ.

The parish and school at St. Michaels, along with several other mission parishes throughout the Diocese of Gallup, are staffed by priests, sisters and friars from Our Lady of Guadalupe Province, a Franciscan province headquartered in Albuquerque, NM. The province spans multiple dioceses in Texas, New Mexico and Arizona.

There are currently seven Franciscan provinces in the United States, all of whom face the same challenges. The most pressing issues are a decline in both vocations and funding for ministries, which has led to fewer priests and sisters, larger areas for a single friar to cover, and less money to support the mission of the province.

The Franciscans are working to address both challenges. In 2018, six provinces in the United States approved a resolution asking the Minister General in Rome to officially restructure into a single coast-to-coast entity. Three months later, the request was approved, and the restructuring is currently set to be implemented over five years, with completion slated for 2023.

Locally, the Guadalupe Province held two separate sessions on the Navajo reservation – one in January, and one in March.

“The basic process of the two listening sessions…was a bit different. The first was an open microphone for the people of the Reservation to share with the Provincial Administration and the friars about their experience of the presence of the Franciscans among the Navajo people.  What is good?  What could be better, and how could it be made better?” Fr. Jack Clark Robinson explained via an email. Fr. Robinson is the provincial minister of Our Lady of Guadalupe Province.

In the second session, Fr. Robinson gave the 80-90 parishioners in attendance a handout with hard data on the challenges and issues facing the Franciscans who minister in the Diocese of Gallup. It notes a decline in friars – from 33 on the reservation in 1970 to 13 in 2019. Of the $2.5 million raised for reservation ministry, often from outside sources, the handout notes that 19% is used to directly support friars, 17% goes to St. Michaels Indian School, 36% supports maintenance, staff, and utilities at the school, and 28% goes to ministries unrelated to the school.

“These sessions are prompted by the fact that we know that we cannot continue to be doing things on the Reservation the way that we have been doing them, as we are running out of friars,” Fr. Robinson told the Voice. “And we have lots of buildings and other facilities on the Reservation, which require lots of money for maintenance and operation. The cost of maintenance and operation for the facilities at St. Michael Mission is about $200,000 a year, and the question is could we make better use of those facilities and that money?”

Following the presentation of data, the attendees were asked to break into small groups for a discussion: “How can the friars help empower the people to proclaim and live the Gospel in the face of changes in the near future?”

Amanda Joe is a parishioner of St. Berard Parish in Navajo, NM. Her son attended St. Michael’s School and received a scholarship to help with the cost of tuition – a scholarship which is funded with the help of the Guadalupe Province. [editor’s note – she also works for the Diocese of Gallup as a coordinator for mission appeals] After attending both listening sessions, she feels the Franciscan missions could benefit from more direct engagement on a local parish and school level.

“One of the things they brought up at that second meeting was they wanted the priests to come out to the school and to talk to the children about vocations [as] something to consider, so that we have future priests. And then also the sisters, they wanted the sisters to present themselves also at the school. Because the way it’s going, we’re not going to have priests and religious out there,” she said, adding her support for funding to continue for St. Michaels Indian School.

Joe also feels that the school and friars can’t be expected to undertake evangelization alone – for her, the faith starts in the family.

“To have strong families with strong marriages out there, so that they can bring up the children in the faith. They have a good school there at St. Michaels – I think it just needs to be more [of a] partnership there, just to make their presence known. Just to be mentors to the children to influence them to open their minds, that they should consider vocations instead of kind of being lost. It’s something very important that we should – even as families – support our children in those vocations. Even being there and talking to the children, I think that would really help.”

Fr. Clark echoed similar sentiments, and his hope that parishioners would welcome the opportunity to take a more active role in evangelization.

“The feedback has been positive toward the ministry of the friars, but has also indicated that we have lots to learn from the people and lots to share to help the people understand the reality of all of the challenges to religious life and ministry in the United States today.  That is why it was so important to look at the numbers of friars on the Reservation over the course of years.”

He recalled a time when it was “normal” to grow up around dozens of Franciscan friars and sisters on the reservation.

“But they just aren’t there anymore, not from any plan to reduce the numbers, but because all over the United States there are fewer Sisters and Friars who could come.  In one way, this is a depressing development, but in another it is a great opportunity for the Navajo and other Catholic laity to take over what is their Church and their Faith, then share that Church and Faith with others!”

Joe hopes that the need will be seen and understood by parishioners who attend reservation missions, and that specific goals and objectives can be implemented to address the challenge of religious education and vocations.

“I think that’s the most important thing, because the need is now,” she said. “Because if it’s not really set, it would be hard. It should be a goal, financial, people- whatever the Church needs. We need to be [aware of] that so we can all work together on it.”

Due to the popularity and results of the Navajo meeting, Fr. Clark hopes to hold more listening sessions in other areas of New Mexico, including Gallup, Acoma and Laguna Pueblos, Albuquerque, and Roswell.

And despite the challenges facing the Franciscans nationwide, his discussions and conversations with the Navajo people have given him hope for the future.

“The Province will try to listen and learn from the People in order to see what we can do together to continue the proclamation of the Gospel, in new ways and with new energy. The most happily surprising part of these first two sessions for me was simply the presence of so many people who were willing to spend their evening with us to share their wisdom and insights when they could have been doing so many other things with their time!” he recalls. “That is a great sign of the importance of the Catholic Faith and even of the Franciscans in the lives of the people.  What a wonderful affirmation that the Holy Spirit is alive among the Navajo People.”