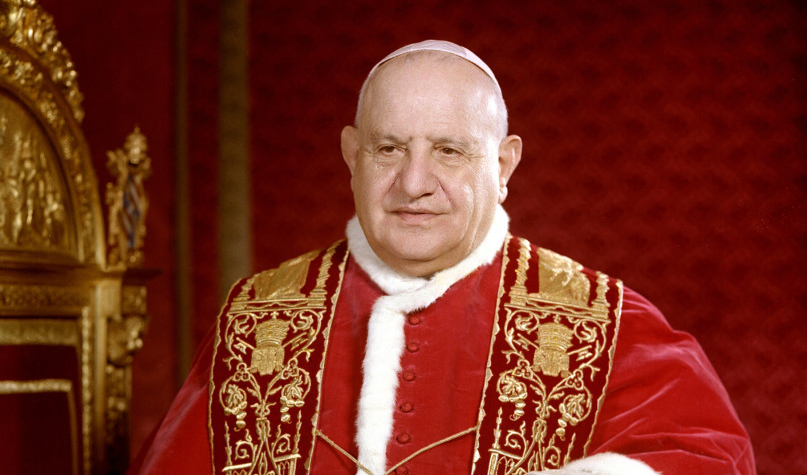 Angelo Giuseppe Roncalli was the fourth of fourteen children born to a family of sharecroppers that lived in a village in Lombardy. After his ordination as priest in 1904, Angelo returned to Rome for canon law studies. He soon worked as his bishop’s secretary, Church history teacher in the seminary, and as publisher of the diocesan paper. He served in a number of posts, including papal nuncio in France and a delegate to Bulgaria, Greece and Turkey. In 1953, Pope Pius XII made Roncalli a cardinal as the Cardinal-Priest of Santa Prisca in addition to naming him the Patriarch of Venice.

Roncalli was elected pope on at age 77 after 11 ballots. His selection was unexpected, and Roncalli himself had come to Rome for the papal conclave with a return train ticket to Venice. Although few people had as great an impact on the 20th century as Pope John XXIII, he avoided the limelight as much as possible. Indeed, one writer has noted that his “ordinariness” seems one of his most remarkable qualities.

Pope John XXIII surprised those who expected him to be a caretaker pope by calling the historic Second Vatican Council (1962–65), the first session opening on 11 October 1962. He did not live to see it to completion. Pope John died of stomach cancer in1963, four and a half years after his election and two months after the completion of his final and famed encyclical, “Pacem in Terris.”

His passionate views on equality were summed up in his famous statement: “We were all made in God’s image, and thus, we are all Godly alike.” John XXIII made many passionate speeches during his pontificate, one of which was on the day that he announced the Second Vatican Council in the middle of the night to the crowd gathered in St. Peter’s Square: “Dear children, returning home, you will find children: give your children a caress and say: This is the caress of the Pope!”

On his deathbed, Pope John said: “It is not that the gospel has changed; it is that we have begun to understand it better. Those who have lived as long as I have…were enabled to compare different cultures and traditions, and know that the moment has come to discern the signs of the times, to seize the opportunity and to look far ahead.”

In 2013, Pope Francis – bypassing the traditionally required second miracle – declared John XXIII a saint based on his merits of opening the Second Vatican Council. He was canonised alongside John Paul II. John XXIII today is affectionately known as the “Good Pope” and in Italian, “il Papa buono”.

St. John XXIII feast day is not celebrated on the date of his death as is usual, but it is on 11 October, the day of the first session of the Second Vatican Council. Pope Francis added his optional memorial to the worldwide General Roman Calendar of saints’ feast days, in response to global requests.

“See everything, overlook a great deal, improve a little.”