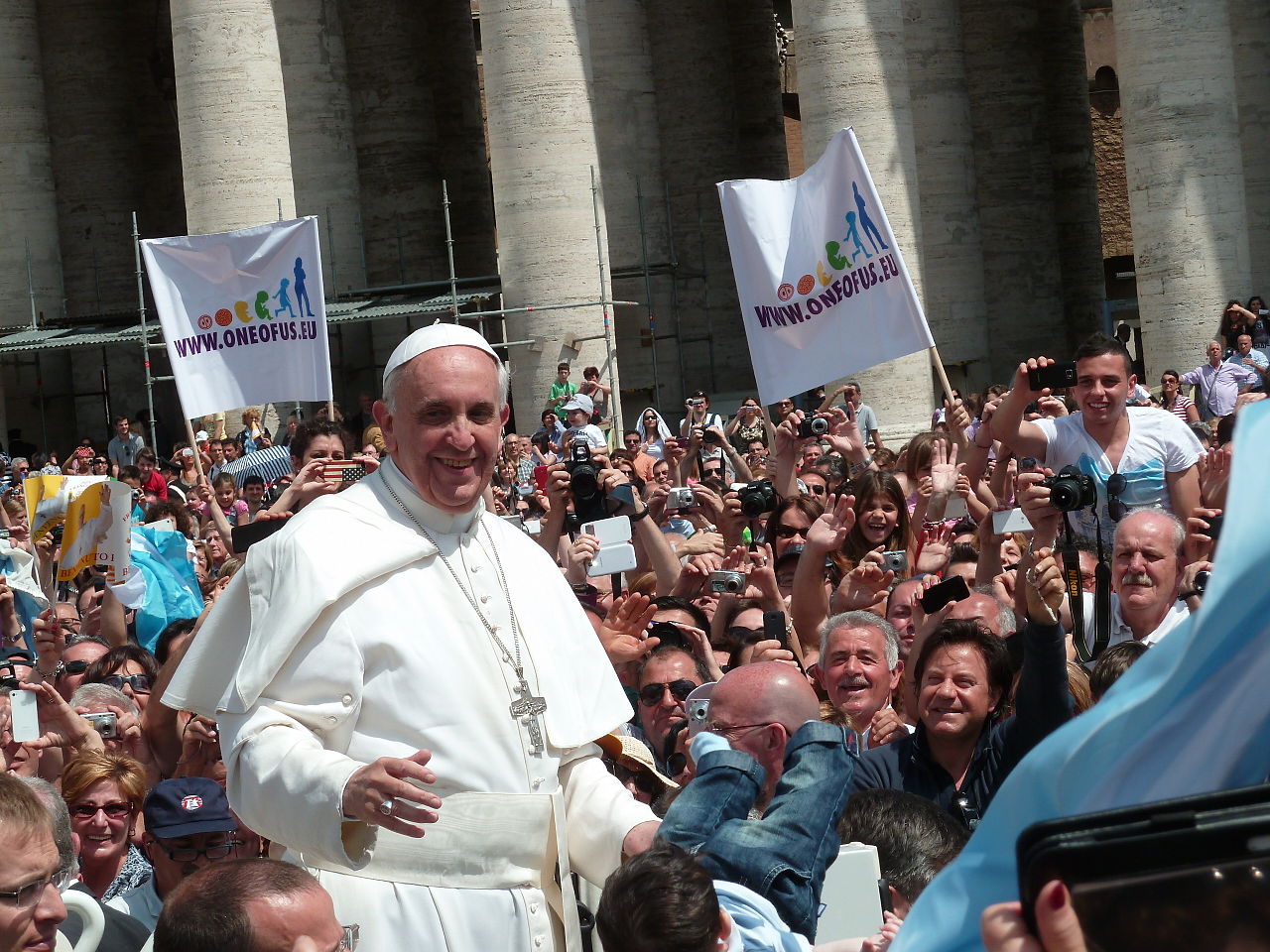 The recent statement of Pope Francis on the death penalty and the use of prisons as punishment have been treated as revolutionary in the media at large. In fact, his words are revolutionary – precisely because they are exactly in line with what the Catholic Church and Popes before him have taught. In matters regarding the dignity of life, the teachings of the Church are revolutionary.

However, the tendency of reporters on both sides of the issue to inflate the intentions of Pope Francis and treat him as if he was breaking new ground means that the true meaning of the Pope’s message often goes unheard. Even many recent articles from normally excellent Catholic sources carried misleading headlines such as “Pope calls for abolishing death penalty and life imprisonment”. It is true that he has called for the abolition of the death penalty – as have Popes before him – but he did not also say that life imprisonment should be abolished as well. The two forms of punishment, while related, also call for examination on an individual basis.

First, the death penalty. Here are the Pope’s words:

“It is impossible to imagine that states today cannot make use of another means than capital punishment to defend peoples’ lives from an unjust aggressor.”

This is not a new or erroneous statement. Pope Francis is not in any way seeking to change Church teaching – he is in fact defending it. He even cites in his speech the relevant passage from the Catechism of the Catholic Church:

“Assuming that the guilty party’s identity and responsibility have been fully determined, the traditional teaching of the Church does not exclude recourse to the death penalty, if this is the only possible way of effectively defending human lives against the unjust aggressor.

“If, however, non-lethal means are sufficient to defend and protect people’s safety from the aggressor, authority will limit itself to such means, as these are more in keeping with the concrete conditions of the common good and more in conformity to the dignity of the human person.

“Today, in fact, as a consequence of the possibilities which the state has for effectively preventing crime, by rendering one who has committed an offense incapable of doing harm – without definitely taking away from him the possibility of redeeming himself – the cases in which the execution of the offender is an absolute necessity ‘are very rare, if not practically nonexistent.’”

Note that the Pope and the Catechism are in full agreement – authority must limit itself to non-lethal means of punishment when in modern society there is a nonexistent need for execution.

Pope Francis is not the first pontiff to call for the abolition of the death penalty. In November 2011, Pope Benedict XVI told an audience of anti-death penalty activists that he hoped their efforts “will encourage the political and legislative initiatives being promoted in a growing number of countries to eliminate the death penalty.” Pope John Paul II, in his encyclical Evangelium Vitae, affirms the same teaching:

“It is clear that, for these purposes to be achieved, the nature and extent of the punishment must be carefully evaluated and decided upon, and ought not go to the extreme of executing the offender except in cases of absolute necessity: in other words, when it would not be possible otherwise to defend society. Today however, as a result of steady improvements in the organization of the penal system, such cases are very rare, if not practically non-existent.”

So why, if the Catechism allows for the execution of the offender in a case of absolute necessity, do the Popes still call for its abolition? There are many reasons. First and foremost, as stated above, a properly structured penal system should have no need of executions to properly defend society as a whole. Second, a system that makes the death penalty legal tends to abuse it, not reserving it for those practically nonexistent cases, but instead applying it at will out of a sense of vengeance or other unjust motivation. The death penalty tempts those who may apply it to wield it as a political weapon. Think of the many countries where the death penalty is used on the political enemies of those in power, or upon racial or religious minorities. In his speech, Pope Francis noted that in these countries where the death penalty is legal, unjust executions are disguised as “clashes with offenders or presented as the undesired consequences of the reasonable, necessary and proportionate use of force to apply the law.”

So we have seen that Pope Francis is upholding the teachings of the Catholic Church. But what of life imprisonment? Has he called for its abolition?

The confusion here is due to the following statement from the Pope’s speech (the added bolding of the statement is mine):

“All Christians and people of goodwill are called today to fight not only for the abolition of the death penalty be it legal or illegal, in all of its forms, but also for the improvement of prison conditions in the respect of the human dignity of those who have been deprived of freedom. I link this to the death sentence. In the Penal Code of the Vatican, the sanction of life sentence is no more. A life sentence is a death sentence which is concealed.”

This is what the Pope seems to be saying: A life sentence, when carried out in an improper prison condition, is little different than a death sentence. In essence, Pope Francis is calling for the overall improvement of prison systems, so that even the dignity of the human criminal is respected. This does not mean that punishment is to be avoided, since proper and just punishment for a crime is a form of compassion, but that the punishment is carried out in such a way that it recognizes the prisoner as a human being. If the method of punishment is no better than death, it is an unjust punishment, and it is these methods of unjust punishments that should be abolished.

Again, Pope Francis is not stating anything which has not already been taught by the Church. In the same encyclical, Pope John Paul II addresses the issue of unjust penal systems, stating:

“The problem must be viewed in the context of a system of penal justice ever more in line with human dignity and thus, in the end, with God’s plan for man and society. The primary purpose of the punishment which society inflicts is ‘to redress the disorder caused by the offence’. Public authority must redress the violation of personal and social rights by imposing on the offender an adequate punishment for the crime, as a condition for the offender to regain the exercise of his or her freedom. In this way authority also fulfills the purpose of defending public order and ensuring people’s safety, while at the same time offering the offender an incentive and help to change his or her behaviour and be rehabilitated.”

When an offender’s sentence does not offer them rehabilitation or an incentive to repent, that sentence in unjust because it treats them much the same as a penalty of death would. Once again, a prison system that treats a prisoner with a life sentence in an unjust matter is no better than a penalty of death.

Pope Francis goes on to explain that there are many instances still in modern times where the prison systems are unjust: think of the many countries where prisoners are incarcerated without trial, or simply because they happen to belong to an unfavored minority. Think of prisoners who are put in solitary confinement, and of the very young and very elderly who are treated the same as other prisoners. Even in our own country, think of the prisoners who spend years waiting to serve out a death sentence, many of whom were incarcerated because of incorrect evidence, and many of whom are innocent.

Ultimately, Pope Francis says, we must ask ourselves: when we imprison criminals, are we doing so because of a fair sense of justice for both the aggressor and the victims? Or are we falling prey to a desire for vengeance, a desire to offer “sacrificial victims, accused of the disgraces that strike the community.”?

For many offenses, Pope Francis notes, there may a more productive and merciful way to both address the actions of the offender while serving society as a whole:

“In the last decades there has been a growing conviction that through public punishment it is possible to solve different and disparate social problems, as if for different diseases one could prescribe the same medicine.”

John Paul II notes in Evangelium Vitae that Cain, who committed the first murder against his brother – a terrible crime – was not condemned to die by God. He was not excused from punishment, either, but the punishment for his crime was both just and merciful.

“But God cannot leave the crime unpunished: from the ground on which it has been spilt, the blood of the one murdered demands that God should render justice…And yet God, who is always merciful even when he punishes, “put a mark on Cain, lest any who came upon him should kill him” (Gen 4:15). He thus gave him a distinctive sign, not to condemn him to the hatred of others, but to protect and defend him from those wishing to kill him, even out of a desire to avenge Abel’s death. Not even a murderer loses his personal dignity, and God himself pledges to guarantee this. And it is precisely here that the paradoxical mystery of the merciful justice of God is shown forth.”

It is easy to let ourselves become swept up in headlines and their declarations of “revolutionary” statements by Church leaders – in this the media particularly loves to focus on Pope Francis. But in most matters concerning the teachings of the Catholic Church, the truth encompasses far more than a simple headline can capture. Pope Francis, once again, is daring to uphold and proclaim the teachings of the Catholic Church, teachings which have always been revolutionary.