Elizabeth of Portugal was the great-niece of Saint Elizabeth of Hungary and queen of Portugal, who succeeded brilliantly in making peace and mediating disputes in her family and in her marriage. At the age of twelve, Elizabeth was married, for dynastic reasons to Dinis, the king of Portugal. At seventeen, the queen would give her husband in birth, two children. Unlike her aunt’s marriage, Elizabeth’s marriage was filled with domestic violence and infidelity. Her husband the king, Dinis, fathered at least seven illegitimate children by various mistresses, then insisted that they be raised in the palace with the children he had had with Elizabeth. If she felt any bitterness toward Dinis, Elizabeth suppressed it and acted as a devoted foster mother raising the children as her own in Christian discipline and piety. 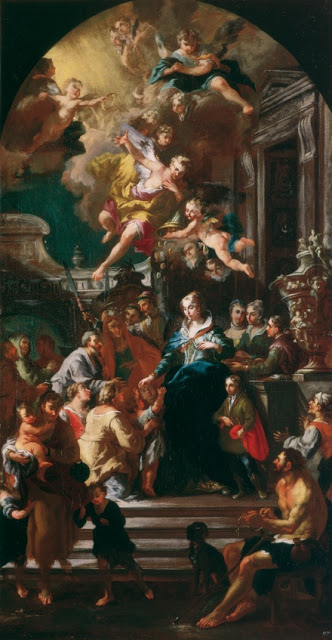 Elizabeth endured all the insults and slights from her husband with great patience and forgiving love. To atone for the adulterous escapades of the king, Elizabeth undertook austere penitential practices and lived a life of renunciation and prayer as though she belonged to a religious order. She prayed, sacrificed, and made reparation in order to obtain the conversion of her husband. In doing so, she thought nothing of herself and did not weep for the many wrongs that had been done to her, but rather lamented that God was so much offended. Finally, after a long and sorrowful time of trials, the queen managed to convince the king to give up his immoral way of life; she guided him to a serious conversion, so that afterward he became an example for Christian husbands and princes. When Dinis died, in his will he named Elizabeth executor of his estate—a last-minute token of esteem for his long-suffering wife.

Throughout her life, Queen Elizabeth negotiated peace within the royal family through her serious admonishments and insistent pleas. As a widow, she devoted herself exclusively to works of charity. She sold her belongings, especially her costly jewelry, and gave the proceeds to the poor and to the convents she had founded, and from then on she dressed like a Franciscan tertiary. In that garb she made a pilgrimage to Santiago de Compostela. Upon returning home, she withdrew to the convent of Poor Clares; nevertheless, in order to have the freedom to perform her works of charity, she put off taking vows of that order until shortly before her death.

Elizabeth had a clear understanding of her role in life. She always dismissed praise for her generosity by saying: “God made me queen so that I may serve others.” In the final period of her life, Queen Elizabeth repeatedly made her influence felt for the common good and the restoration of peace. She left the convent one last time in order to make peace between her son, Alfonso, and her son-in-law, Ferdinand IV, during the war between Portugal and Castile. The sixty-five-year-old queen hastened to the battlefield, despite the oppressive heat in the summer of 1336. The mere news that she was approaching brought about a cessation of the military conflict. When the queen arrived on the Portuguese border she came down with a high fever and shortly thereafter died in the arms of her son and daughter-in-law.

Elizabeth of Portugal is the patron saint of peacemakers and victims of adultery. Christian married couples experiencing disagreements and conflict in their marriage and family could take this saintly wife and mother as an example and call upon her as a powerful intercessor.

Saints for Today: Methodius of Constantinople (790-847)